skip to main | skip to sidebar

have a look at it here

almost the same, but new stories and new pics...

It has been too long

sitting at home is getting at me...
I have been thinking too much, and doing too little...
Maybe it's not really like that, but it feels like it. I want to get out again (if possible on my bike), but with what reason? Do I need a reason to go out? I believe I do, I need some sort of goal to go somewhere. Not just siton my bike and see where the road ends (which will never happen, I am sure of that) but to have somewhere to go to. Not to mind the question with who to go?

The trip I made with Marjolein seems to get more and more distant. Sometimes it feels as if it weren't us who went on that trip. How ridiculous some of the things we did. Would I ever do it like that again? I don't think so, mainly because the chance I will go on a trip with Marjolein again is small, very small.

In the meantime I am spending my days editing a photobook with pictures of our trip and all the stories we wrote for the NRC Next weblog (watch preview). And of course, I am still on the bike a lot: the mountainbike, the racingbike, and of course my good old city bike. But besides a little trip to Maroc with a friend of mine, my sturdy Koga Miyata is standing still...

I hope the next time, I can take a photo and film camera, because I do want to show the things there are to see along the road. The world is too beautiful not to see.

The sun is out!

and what a difference it makes...
Gepost door Juul op 23:02 2 opmerkingen:

Maybe I should keep this blog updated with some stories, some thoughts and other things I want to write down. Every now and then I have the urge to write some things about our trip, about the things we encountered, about the different cultures we met.

Last night I saw a documentary about women in an Israelian prison who were caught wearing a big belt with explosives, ready to give themselves to Allah together with other people who accidentaly happened to be in the same spot as they were. but they failed, and were put in prison.

It is so interesting to see this. What goes on in the mind of these women? Some claim they do it just to get out of their own home, to escape life. Just as I would escape life by going out on my bike, they will have to do horrible things like this. Is it Allah they fight for? or is it their own right for a life?

In Iran we met a lot of women who were so jealous at our trip. So many times we felt privileged with the freedom we have coming from Europe. We use to say: if you really want to, you can just get on a bike and start cycling. But for them life as a women is way harder than for us. And it is not just the veil that keeps them from doing their things. There were so many young girls who asked us if it was possible for them to study in the Netherlands, and I don't think they necessarily wanted to come to the Netherlands...
In Gorgan we were invited by a family who took us to some friends. Inside no veils and a life you imagine to life in your own culture. but then the stories about not being able to get out, to be stuck in Iran. You better not be ridden over by a car in this country, because even though you're the one who was hit, you would have to pay anyhow...just because you're a women.
Another story is about the english teacher in Minu Dasht and his 16 year old daughter. A really friendly guy who loves cycling himself. So I asked his daughter if she cycled too, upon which the father answers:"no, she is a women, in Iran women don't cycle". So what goes on in his mind standing in front of two women on their bikes, cycling through his country. Is it just the fact that we are from a whole different country that makes it legible for us to cycle around like this, camping in the wild and talking to men?

We met a girl in Mashad who had a friend who cycled around the world. Very special for an Iranian girl. This all happened about 2 years ago.,the organisation is called miles for peace, and they travelled with 14 Iranian people on their bikes. How cool is that! and why doen't it happen more often?

Lately i read an article about a cycling tour in Qatar (ladies tour of Qatar) where it was officially announced that women could cycle without a scarf and in their regular cycling clothes. But there are only foreign female teams...would the teams from their own country also be able to cycle in tight cycling trousers and jerseys? I doubt it.

Maybe I should organise a cycling tour myself, through Iran, together with some Iranian women...just to show that we can do it. Or am I dreaming about something impossible now?

Back where we started 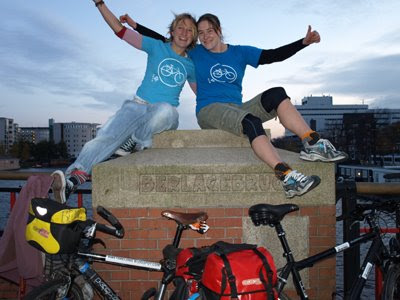 We found each other again. Mayo working in Breda at the moment, Julie living (and working?) in Amsterdam. Slowly getting back into the rythm of city life. Actually that goes unnoticed, before you know, you are back into your old life. Working, seeing friends and troubling your head with things that seem so unimportant while you are away.

The thing that is different from before we left, is the experiences we carry with us, no matter what. And hopefully there are new adventures waiting for us.
Gepost door Juul op 18:53 Geen opmerkingen:

From Moscow the train dropped me in Kiev, Ukraine. the first time without the nessesity of a visa, and to be hounest, I was a bit anxious at the border...but they let me through! After one luxurious (thanks to Damian) but rainy day in Kiev , the train continued to Warsaw in Poland. Again I found myself being spoiled by the hospitality of Damian and his family. This time the sun brightened my last day abroad.

On tuesday I came back to Holland where a 3 day cycling trip through the flat,rainy and very organised Dutch coutryside brought me to Mayo. Seven months ago we left Amsterdam on our bike, now we are both back where we started (ok, Mayo is in Breda and Julie is back in Amsterdam, but we are both back in Holland...) 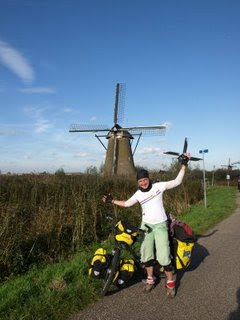 And now the end of my trip is here. The last few weeks of my travels without Mayo, I've been thinking a lot about our big cycling adventure and everything we encountered and experienced. I think it is one of the best things to do somewhere during your life, to see some of the world. Of course I am a lucky bastard that I had (and took) the opportunity to to do such a brilliant trip, but if I could,I would send everybody for at least a few days to a completely different culture. Just to experience how things can be,just to make us aware of our own world and space.

Travelling is addictive, and it only makes me want to see more of the world. Meet new cultures, talk with the people and have a glimpse of their lives. It is amazing to experience and I think that by cycling, you get to see most of it.

So in the future, I really hope that I find a way to go out on my bike again. For now we would like to thank everybody who supported us one way or antoher during our trip, not just our sponsors Vaude, Koga Miyata and the Vakantiefietser in Amsterdam, but specially our friends and family. We had so many good winds and cups of coffee which made our trip far more easy. It was great to notice how many people enjoyed our column on the NRC next site and our stories on our own site.
The columns we wrote for the NRC Next site will hopefully find a way to our weblog sooner or later, and eventually in a paper version, together with some of the best pictures of our trip. (interested? send us an email!: biketobeijing@gmail.com)
Gepost door Juul op 01:07 Geen opmerkingen: 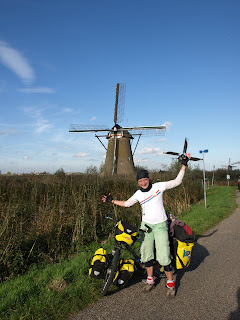 Juul
We are Marjolein en Julie, twio girls from Amsterdam, Holland and we are making a bizar trip on the bike. We want to cheer to our (rowing) friends at the coming Olympics in Beijing. Both our friends and us have the same goal, de rowing course in Mapo, 30km outside of Beijing,we just have a different route.